Headquarters
Standing out from the crowded Paris, Bottega Veneta is headquartered in Milan, Italy.

Paris, France may be known as the fashion capital of the world, but it is not home to every high-end fashion brand. Bottega Veneta has always called Italy home. For half of a century, Bottega Veneta has created quality luxury items that boosted the brand into distinction and into boutiques across the globe. 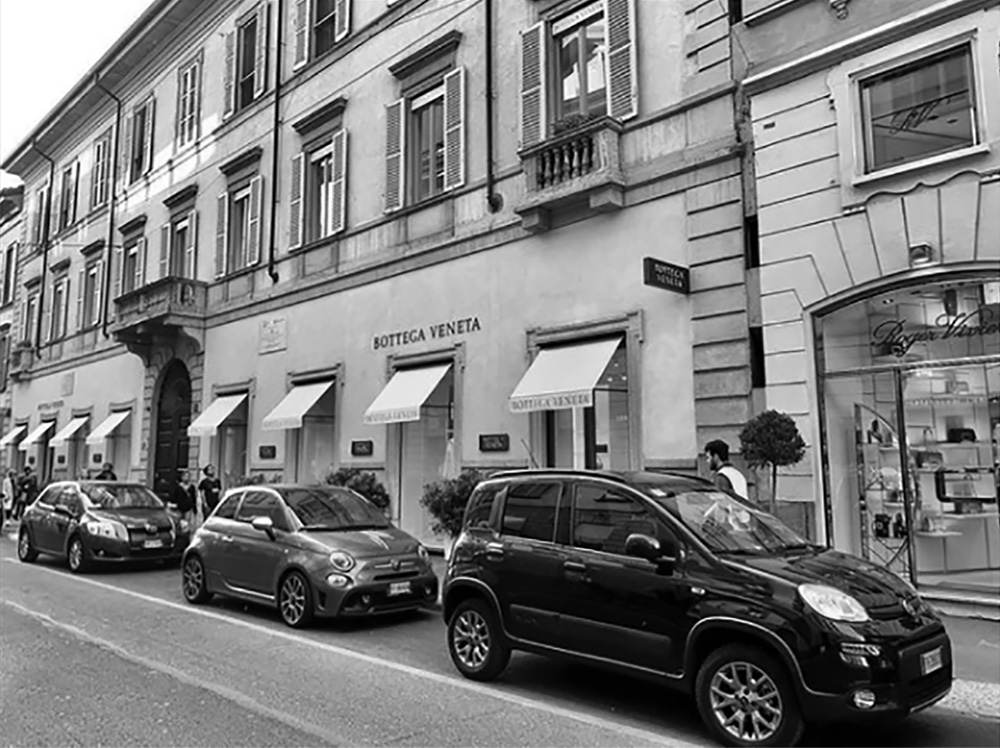 Bottega Veneta may sound like a mouthful, but it is an apt name. Translated from Italian, it means “Venetian atelier”. An atelier is defined as a workshop for an artist or designer, and Bottega Veneta’s birthplace was the city of Vicenza, which is just inland from Venice.

Michele Taddei and Renzo Zengiaro established the first Bottega Veneta boutique in Vicenza in 1966. Taddei was the brains behind the business end, and Zengiaro was the artist with an eye for excellence. Quality is the cornerstone for which they built their brand.

Barely a decade later, both Zengiaro and Taddei had left Bottega Veneta. Taddei’s former wife Laura Moltedo assumed the head of the brand in the early 1980’s but the following years would bring on both highs and lows for the fashion house. It wasn’t until the Gucci Group acquired the company in 2001 that the brand would get back to basics, and back on top, with designer Tomas Maier.

Weaving Through The Competition

By the 1960’s there were many handbags that had taken the retail market by storm, but Bottega Veneta was just about to upset the current trends. Renzo Zengiaro was remarkably trained to work with textiles and wools, but was not yet familiar with working with the rigidity associated with leather. So instead of designing a prototype that resembled the Chanel 2.55 bag or Louis Vuitton Speedy bags, he decided to build on what he knew.

Zengiaro began his work with Bottega Veneta using very thin leather that resembled fabric. To ensure that the leather would be strong enough for a handbag, he wove the leather together. This pattern of weaving became known as Intrecciato, and became a staple of Bottega Veneta. Not only is the pattern utilized in the manufacturing of purses, but is a feature on all of their products.

The first handbags perpetuated their differences from other bags on the market by incorporating a different structure. In company with the pliable leather, the bags themselves were larger, unstructured pieces similar to hobo bags. Now there are many styles from large bags to backpacks and wallets.

From the start, Bottega Veneta was built upon quality and excellent craftsmanship. The weaving technique of Intrecciato maintains that quality with intricate detail and strength. Only the finest leather, usually lambskin, can be delicately hand sewn in this way. But various bags have expanded to using exotic leathers like ostrich, crocodile, and even stingray.

To Logo Or Not To Logo

Akin to quality and craftsmanship, Bottega Veneta is also known for its discretion. The company’s motto: “When your own initials are enough”, was meant to dismiss the necessity of a visible logo.

Unlike Louis Vuitton, who famously created a brand monogram to thwart imitation and cover the entire exterior of their handbags, Bottega Veneta original bags did not feature any brand markings. At least there were no logos at first.

As the company changed hands the ideals changed as well. After Laura Moltedo assumed control of the Bottega Veneta brand, the designs for handbags became more trend-focused. Part of that trend was the use of a BV logo. Unfortunately, popularity in Bottega Veneta declined throughout this time period, and it wasn’t until the brand was bought by The Gucci Group that things got back to basics.

After The Gucci Group acquired Bottega Veneta in 2001, Tomas Maier became the creative director and revitalized the brand. One of the first things he dismissed was the unnecessary use of flashy logos. Maier stored the focus of Bottega Veneta to quality and craftsmanship, and this restored the company to its former grandeur.

Since Tomas Maier took the reigns of Bottega Veneta it has returned to its elegant place at the top of the fashion market. Beyond impeccable handbags, the brand produces a wide range of fine leather goods including shoes and clothing, and even fragrances.

Bottega Veneta has over 100 boutiques located in over 30 countries.

It can take upwards of 8 hours to weave the leather in the Intrecciato pattern for iconic handbags.