Location
Headquarters: Italian fashion house Fendi moved into its new headquarters in 2015 at Rome’s Palazzo della Civiltà Italiana – a building commissioned by dictator Benito Mussolini in 1943 that has been renovated by local architect Marco Costanzi.

The famous Italian brand Fendi officially began in Rome in 1925 when young entrepreneur Adele Casagrande married Eduardo Fendi. Their first boutique was a small store in the city, with the couple living in the rooms above the shop. Although originally a leather and fur workshop, Fendi soon added hand-stitched handbags to their product offering. 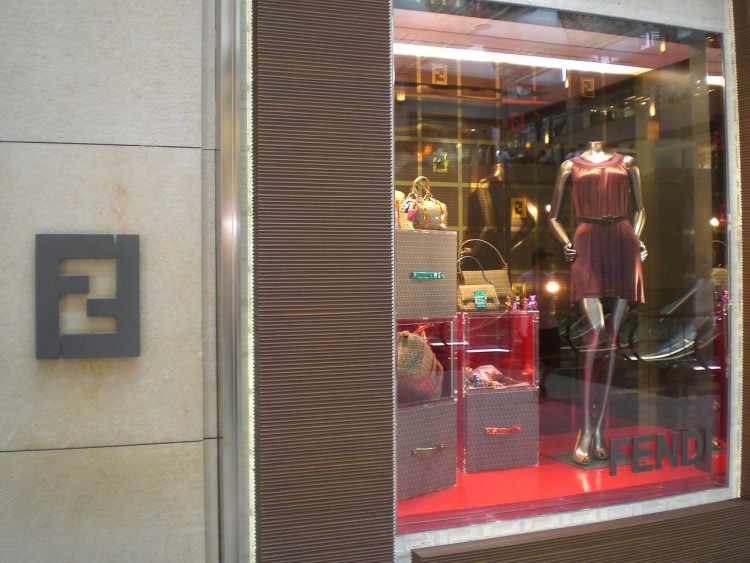 The rise of Fendi

During the next 15 years they had five daughters Paola, Anna, Franca, Carla and Alda who became an integral part of the brand’s heritage. The sisters were part of the atelier from birth, often sleeping in the lace-lined handbag drawers and grew up with Fendi handbags as their toys. When they were teenagers they were officially involved in the business giving a fresh insight into woman of their time and what it meant to be female in the post-war era. Italian women became fascinated by the Fendi brand and thus began their affiliation with both taste and style.

The birth of the double-F logo

In fact it was the sisters who, unafraid to take business risks, employed up-and-coming designer Karl Lagerfeld in 1965. Lagerfeld brought about change at the House of Fendi, creating the famous double-F Fendi logo. He also experimented with leather and new ways to print, weave, dye and tan it, making handbags softer and introducing a more unstructured handbag style. 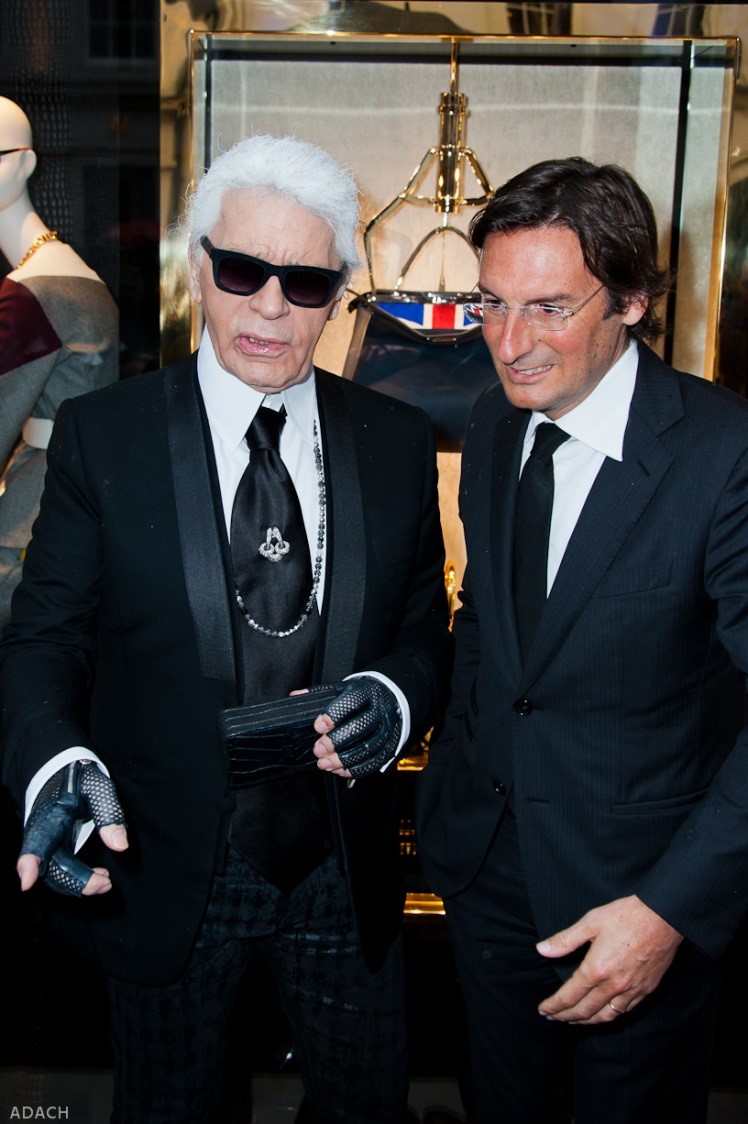 Over the next few years the double-F logo bag became a must-have item, prompting Fendi to produce a line of now iconic chocolate and caramel striped handbags with the double-F logo on the front. At the same time Fendi bags also made their way onto the New York scene, having been discovered in Rome by Marvin Traub, the President of Bloomingdales’ department stores.

In 1994 daughter of Anna, Silvia Fendi, joined the business as Creative Director for Accessories and Men’s lines. She found the 80s-style Fendi bags to be normal, plastic and plain, and decided to re-launch the original hand-stitched handbag tradition of Adele Fendi, naming it the Selleria line. The Selleria line focused on treated cowhide handbags characterized by a slightly bumpy surface and large, obvious saddle stitches. The Selleria bags soon reached cult status and was an indication of her ability to create an ‘It’ bag. In 1997 Silvia created the famous Baguette Bag. In the same year the brand held a fashion show on the Great Wall of China that could be seen from the moon! Again Fendi showed the ability to make headlines, and its ability to uphold an ever evolving reputation.

Karl Lagerfeld and Silvia Fendi at a fashion show in Italy

This micro Baguette bag was designed to fit right under your arm, just like a French baguette loaf, and was created in a multitude of textures, materials, patterns and colours to appeal to each and every woman – from velvet and fur, through to crocodile, tartan and raffia. Every Baguette bag was designed to be eye-catching, with a large double-F logo on the front, again in different materials such as metal, beads, or crystals. This ‘It’ bag was seen being carried by Madonna and supermodel Naomi Campbell and was also boosted in fame by appearing regularly in cult TV series Sex and The City, carried by over-the-top fashionista Carrie Bradshaw. Even Meryl Streep threw it around in The Devil Wears Prada. Such was its success that Fendi created a new style every 6 months to keep them flying off the shelves, and added an even tinier addition aptly named the Croissant.

A modern-day version of the Fendi Baguette bag

The 2000’s saw the introduction of a range of new must-have Fendi handbags. Firstly the Fendi Spy bag, the polar opposite of the Baguette. The Fendi Spy was a slouchy leather bag with small hidden compartments (hence the name) and double-braided handles. Kate Moss was a fan, catapulting it into becoming the next ‘It’ bag, along with waiting list and a price tag of $2000 and upwards.

Shortly after the Fendi Spy the next cult bag, the B Bag, was created. The B Bag has two large buckles on the front and a chain handle, and was produced in a variety of materials from leather, snake and straw, through to patent with the hottest version being the black and white monochrome style. With a price tag of $27 000 and up it was no wonder that it became an instant hit amongst celebrities – seen on the arm of the Hilton sisters, Paris and Nicky, Jessica Simpson, and Victoria Beckham to name but a few.
Another firm favourite, the Fendi Peekaboo, was launched in 2009 but only reached popularity status a number of years later. Now a best-seller, the bag comes in a variety of sizes, colours and fabrics.

Over the years Fendi continues to produce interesting and must-have handbags, always at the forefront of fashion, and always attracting a new customer. The classic Baguette had an update with a selection of DIY versions – needlepoint or colour your own Fendi. Although the thought of making a potential mistake on an expensive designer piece would surely be a worry to the purchaser. In 2014 customers could even download an app and design their own Baguette, ensuring that Fendi entered the digital-age in a clever and engaging way. 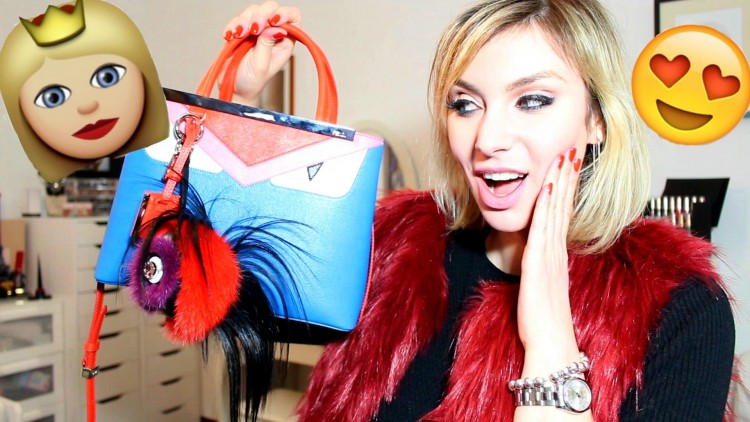 When authenticating your Fendi you can look at a few things. Firstly, the double-F logo should never have two touching F’s. Secondly, all Fendi bags made post 1980 will have a 15-17 digit serial number stamped onto the lining, embossed on the leather inner tag or stamped under the interior label. The middle part of the number is known as the art number and should match the authenticity card. Newer Fendi bags have a hologram inside them fixed to the fabric tag – make sure you look for a high amount of effect and a lot of detail.