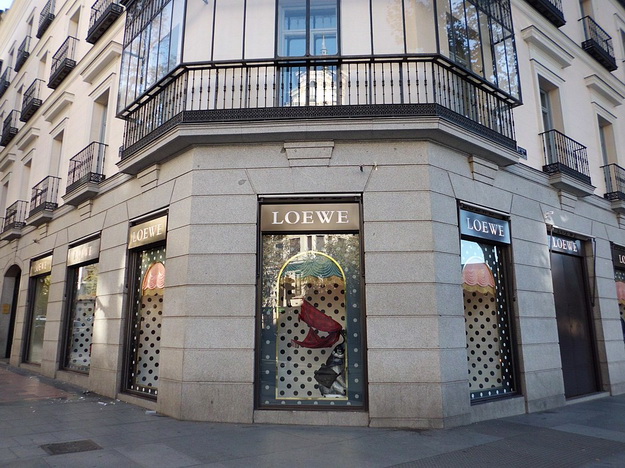 The Loewe headquarters in Madrid

More than 175 years ago, in 1846, Loewe began as a leather making collective in Spain. Enrique Loewe Roessberg, a Hessian merchant, joined a group of leather craftsmen in Madrid and introduced the idea of the Loewe label.

In the early 1900s, Queen Victoria Eugenie of Battenberg (aka Queen Ena of Spain) became a regular customer of the brand. In 1905, the brand obtained a “Royal Warrant of Appointment” and became an official purveyor of leather bags to the Royal Household of Spain. With a reputation for high-quality leather craftsmanship and this royal cachet, Loewe began to emerge as a luxury fashion brand.

Loewe introduced its first “ready-to-wear” collection in the 1960s. The Loewe logo, introduced in the 1970s, was first designed by Karl Lagerfeld. The brand then expanded into perfumes and fashion. Designers Giorgio Armani and Laura Biagiotti created early womenswear collections for Loewe.

Known today to be “obsessed with craftsmanship,” Loewe states that its focus is on:

Loewe celebrates innovative designs and employs innovative master artisans who demonstrate only the highest levels of expertise and skill with leather goods.

Since 2013, Jonathan Anderson (JW Anderson) has been creative director of the house of Loewe. Anderson led the company to refresh its brand identity and further reassert itself as a major luxury retail brand.

Anderson has created collections for men and women that have been dubbed, “surreal,” “unconventional,” and “thought-provoking.”

He designed the original puzzle bag in 2015, which has become one of Loewe’s most recognizable designs.

In 2017, under the direction of Jonathan Anderson, the company created the Loewe Foundation Craft Prize–the “world´s first international award for contemporary craft.” This prize recognizes artists and makers who create one-of-a-kind objects of superior aesthetic value.

Some iconic Loewe handbag styles include:

The Puzzle in particular is one of the most famous “Spanish it bags,” transcending seasons to become an evergreen choice for a posh, functional, and beautiful handbag.

The brand’s most recognizable and iconic handbag comes in a cuboid shape, with roughly nine pieces of leather sewn together. The construction allows the bag to lay flat. Or it can be worn at least five ways: shoulder bag, elbow satchel, clutch, messenger backpack, and crossbody sling.

Originated by current creative director Jonathan Anderson, it was introduced at the men’s spring 2015 show in Paris and quickly became an “it bag” both on trend and timeless in nature.

Nano puzzle (the smallest of the puzzle line) starts at around $1645.

Loewe says that it seeks out “low impact materials sourced and produced with our planet in mind.” The brand lists “traceability of origin, fair conditions for farmers, animal welfare and the protection of biodiversity” as factors considered when procuring raw materials.

In 2021, Loewe introduced The Surplus Project in order to reuse materials from previous collections. A good example of this initiative is the Woven Basket Bag.

ALERT YOUR BANK BEFORE YOU BUY

Loewe offers a care and cleaning service for all leather goods, as outlined on this Care Guide Page. Visit a Loewe store to learn more.