Louis Vuitton Malletier opened his first store in 1854, in Paris, amidst a booming expansionism period. The travel bug was spreading like wildfire through Europe, and the demand for boxes and trunks for packing was at its highest thus far in history. After an internship in packing and box-making, Louis took his new skills and opened his own store with an idea that would revolutionize luggage and create an international luxury brand. 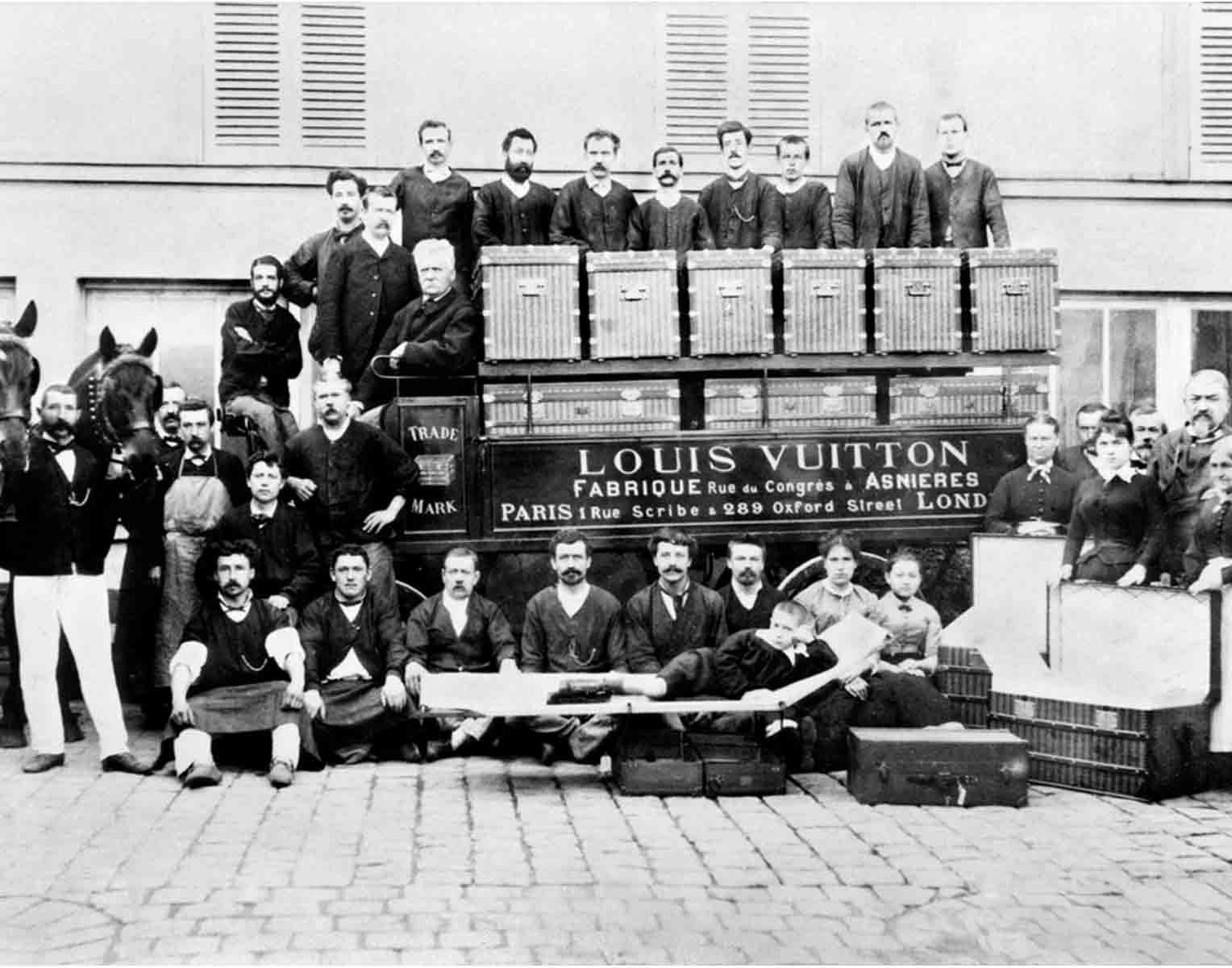 While trunks have been around for thousands of years to assist in travel and to serve as storage, it wasn’t until the late 1800’s that they became a hot commodity. The most common trunks were constructed of wood, covered with a paper or canvas, and featured a domed lid to facilitate water-runoff. Louis Vuitton created the first trunks to alternatively feature a flat top to benefit stacking and storing, and he covered his trunks with waterproof treated canvas.

The first trunk introduced by Louis Vuitton to showcase the flat-top design and gray Trianon canvas made its debut in 1858. The “steamer” trunk, or flat-top trunk, became aptly named after their storage location when travelling in the cabin of steam ships.

Most of Louis Vuitton’s trunks would be assembled out of wood, generally pine, with brass reinforcements on the edges and corners. The hardware (clasps and locks) would also be golden brass, or occasionally iron. Early trunks would utilize wooden slats across the top and sides to reinforce it when traveling.

With the popularity of the Vuitton luggage, Louis was forced to begin revamping the design of his trunks to thwart counterfeiting and stay current. In 1872, Louis Vuitton replaced the gray Trianon canvas that covered his trunks with his first patterned canvas. The Rayee canvas (rayee is French for stripes) was produced in both beige and brown stripes, and red and white stripes.

A couple of years later, Damier canvas replaed the Rayee pattern. Damier is a checkered pattern, and was originally manufactured in a rare red and white checker, and a brown and tan checker that is reminiscent of the typical LV color scheme today. The Damier pattern is still in production on various Louis Vuitton pieces and in additional color pairings.

With the introduction of the Damier canvas, Louis Vuitton also incorporated the first brand identification. Imitation trunks could only be curbed so much by the modification of canvas and pattern, thus Louis Vuitton began stamping each Damier canvas trunk with “marque L.Vuitton deposee”, which more or less represented the LV trademark.

It wasn’t until after Louis Vuitton’s death that his son, Georges, took the reigns of the LV company and brand. And it was Georges Vuitton who, in 1896, originated the classic monogrammed canvas that is now a worldwide symbol of elegance and luxury.

Replacing the trademark that accompanied the Damier canvas, the monogrammed canvas features Louis Vuitton’s initials and alternating flowers and quatrefoils. These emblems have stood the test of time, and although they originated in the late Victorian era and have Oriental influence, the monogrammed canvas is still a current pattern.

The vintage steamer and cabin trunks of the late 1800’s and early 1900’s were produced in several sizes and with varying utility. Many of the trunks are designed as armoires or wardrobes. These trunks are meant to stand on one end (versus the bottom) and one side would feature drawers, while the other half was designated for hanging garments. Many of these armoires would measure 45 inches in height, 23 inches wide, and 20 inches deep on average.

Courier trunks more closely resembled chests. These tops of the these trunks would open up, and removable trays would create compartments for clothing and accessories. Courier trunks are slightly smaller than the Louis Vuitton armoires; measuring around 39 inches in width, 23 inches high, and 22 inches deep.

Additionally, there were trunks built just for shoes, hats, and shirts. Specialty trunks were created that included a fold-out cot or, for the traveling secretary, a fold-out desk and storage for books. The smaller cube trunks designed for accessories would generally measure 21 inches tall, by 24 inches in length, and just 18 inches wide. While secretary trunks are closer in size to full Louis Vuitton wardrobes.

Other than the ever-changing canvas styles, Louis Vuitton trunks were also covered in Vuittonite canvas, various leathers, and even natural wood. And although these large steamer or cabin trunks are no longer in production, vintage Louis Vuitton trunks can be found through various retailers, both online and in antique stores. Based on the quality of the item the prices can vary from a couple of thousand dollars to several tens of thousands of dollars (USD).

If a vintage Louis Vuitton trunk is a must-have for you, remember to check its authenticity. Ensure that the materials are quality canvas or leather, and the hardware is solid metal (typically brass). Most trunks also contain an LV trademark and a serial number for reference.

The successor of the classic Louis Vuitton trunks, is the smaller hardsided suitcase. The Alzer and Bisten luggage line continued the hardsided design for travel cases, but in a more compact and easier to manage size.

Sorry, the comment form is closed at this time.