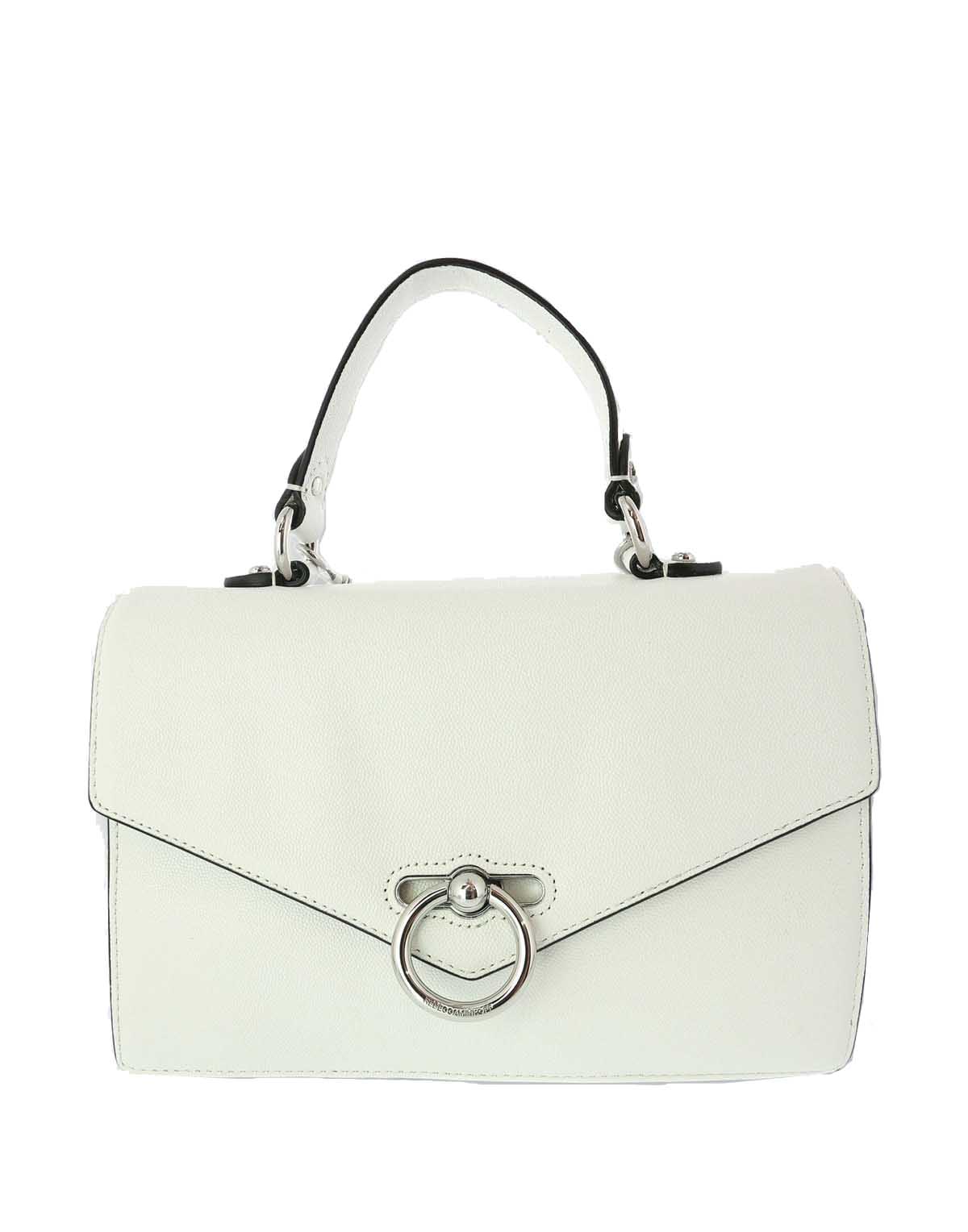 The Rebecca Minkoff style is full of studs, leather, and the right curves to make it a hard competitor to beat. She describes her style as inspired by “party girls” while also noting that she was never one of those girls.

Photo of Rebecca with a brown leather “Darren tote”

Rebecca Minkoff was born in Petersberg, Florida. When she was in high school, she worked in the costume department, and that was when her interest in design started to flourish. When she turned 18, she moved to New York City to pursue her career aspirations.

Having no academic history in design other than her enjoyment in the costume department, Rebecca was taking a big leap of faith and says that she had little financial support from her family. This was a big step for someone who had no connections to the fashion industry in New York, but thankfully it turned out for the best.

Once she got to the big apple, she managed to land an internship at Craig Taylor’s. During this time, she notes having worked with the CEO, who she said: “took me under her wing and taught me about the whole business.” As recorded in an interview with Entrepreneur

The One That Got The Ball Rolling

In 2001, shortly after 9/11, Rebecca designed a distressed version of the “I Love New York” t-shirt which was worn by Jenna Elfman on the Tonight Show. This was her first design that gained a large amount of attention, giving her a glimpse into the fame she would encounter later.

She has said in an interview with Entrepreneur that she didn’t even make bags at the time. Rather, her focus was apparel. And when she was asked by a friend to make a bag for the movie “Touched” She agreed. This birthed the Morning After Bag, which turned into a raving success. The bag was worn by countless early 2000 celebrities, such as Hilary Duff, and Lauren Conrad.

In 2005, Rebecca joined forces with her brother Uri Minkoff, who had invested in a few medical start-ups, to officially incorporate Rebecca Minkoff LLC. She has said that the beginning of her company’s start was rough, with an important note towards having to adjust her prices to fit the largest consumer category.

The Rebecca Minkoff brand has been a luxury staple for over 10 years and has been empowering women through fashion for its entire time.

The Morning After Bag

Her first design was called the “Morning After Bag.” Its dimensions were made to fit your shoes, a change of clothes, and hygienic products in the event you ended your wild night somewhere other than home.

A modern take on her Morning After Bag, posted by Rebecca Minkoff

She described this design as:

“A bag you’d want to take with you on late nights when you weren’t sure where you’d wind up or when you’d come home the next morning” – Rebecca Minkoff, Interview with Entrepreneur.

Although the original use for her prototype did not work out, once she started carrying this bag around New York, the design quickly caught the eyes of everyone who saw it. This was her company’s first bag design, and thankfully for the fashion industry, it was far from the last.

The road wasn’t straight to success, as she divulges in an interview with The New York Times. She notes being “eviscerated” by owner Cynthia O’Connor, who told her the bag was the wrong size, wrong materials, and not worth the $600 price tag.

Even though she faced negative feedback from some of the (then) current industry tycoons, Rebecca Minkoff’s designs had already caught the eyes of everyone on the street.

This bag has been redesigned into miniature versions, clutches, and even mini-clutches. Rebecca Minkoff has turned what was once a one-off design into an entire collection, which has been modernized while keeping the same feel as the original bag had.

A different Morning After Bag, filled with oranges.

After being instituted into the Council of Fashion Designers of America in 2010, she won awards such as the Breakthrough Designer Award from the Accessories Council (2011).

She was also a member of the first-ever New York State Council on Women and Girls, Further cementing her as an ally in empowering women’s rights.

In 2018, Rebecca Minkoff established the Female Founder Collective. The FFC is a non-profit organization that uplifts women’s aspirations to cultivate their businesses, as well as provides grants to female-founded businesses.

The Rebecca Minkoff company has dipped its fashionable toes into all the pools of bags, with much success. With a variety of crossbody bags, totes, shoulder bags, and even backpacks, her best sellers seem to be a grand assortment of all types.

Minkoff bags tend to range between $250 to $600, making them a more affordable brand on the luxury fashion scale. Don’t mistake this for a lack of quality, because the brand assures that their products are made with real leather, making it a soft and stylish option for a night or day out.

A Rebecca Minkoff bucket bag, with the body of it made up of yin yang symbols

Although Rebecca Minkoff prides itself on being a company that supports and empowers women, there is also a male collection of bags from Rebecca Minkoff. The line is called ‘Ben Minkoff’. A fun play on the founders’ name.

A photo of the Ben Minkoff bag, which was released in 2011

More recently, the Rebecca Minkoff company has released a New York Capsule Collection, reinventing her Morning After Bags, as well as revamping the shirt that started it all. Mrs. Minkoff has proven time and time again that she is here for the long haul, and her bags will forever be a staple in women’s fashion.

A photo of a newer Rebecca Minkoff Morning After Bag

Some Facts on the Woman Who Started It All

While her fashion industry climb has been a glorious feat in itself, Rebecca Minkoff has also tackled multiple other side projects which have only proven that she really can do anything she sets her mind to.

Mrs. Minkoff had created an equally virtual and IRL space called “RM Superwoman” to pair along with the 1028 Women’s March. The RM Superwoman space was meant to tell stories and share experiences between women, while always pushing the advice to “Be Your Own Superwoman”.

A photo, taken from the RM Superwoman Instagram. A quote by Tia-Mowry Hardrict

Along with the FFC and RM Superwoman, working mom Rebecca Minkoff has found the time to write a book that she calls “Fearless: The New Rules for Unlocking Creativity, Courage, and Success.” This book entails Minkoff’s climb from a young girl in Florida to the feminist industry icon we know her as today. She delves deep into her life and her views, while not being afraid to be raw with the reader.

A photo of Rebecca Minkoff’s new book, paired with a signature handbag of hers

Even though Rebecca Minkoff has kept herself quite busy with other projects, she still oversees all of the designs for her company, as well as spearheading the online marketing for her brand.

The Rebecca Minkoff website has a whole page on how to take care of and protect your leather bags here. As well, Rebecca Minkoff offers complimentary repairs on issues that are approved manufacturing defects. They do not cover general wear and tear, handbag restoration, or defects that occur on merchandise produced over one year from purchase.

• Rebecca Minkoff is a mother of three and is married to Gavin Bellour.

• Her first handbag prototype (The morning after bag) was made for a movie called Touched. She was late on delivery but decided to wear it around anyways because she liked how it looked.

• The morning after bag used to come with a ‘handwritten’ note from Vincent. This was actually a number to redirect to the Rebecca Minkoff Website. Rebecca notes that the creative “note from Vincent” has inspired many calls from angry boyfriends and husbands.

• Designers
• Salvatore Ferragamo
• A Guide To Choosing The Perfect Backpack